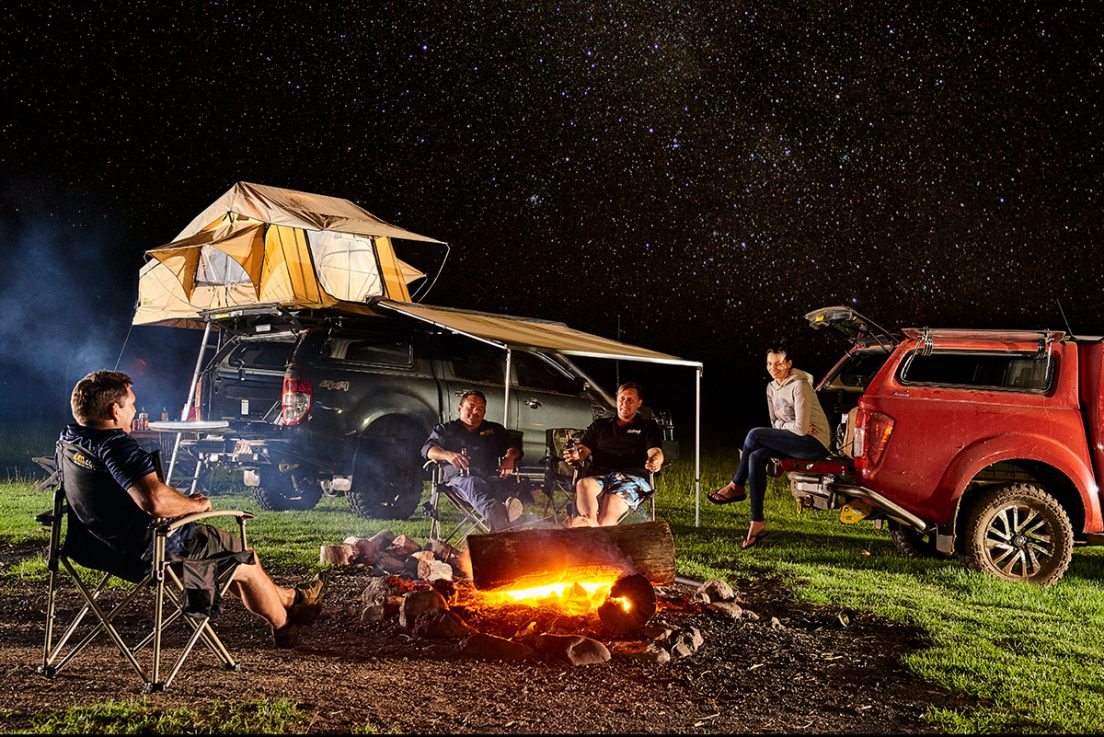 Picture this: You’re far off the beaten track, the perfect camp set-up with your 4WD, nothing but stars, a campfire and some mates to keep you company.

But you’re not roughing it too much … you’ve got a fridge, some lighting, and maybe some music on in the background (oh and don’t forget to charge the mobile phone and the GPS). Aah the serenity. Next morning, you pack up, jump back into your vehicle and get set to move on when … nothing.

The battery is dead.

It seems that your new fancy fridge, your snazzy lighting, music and charging your electronic gizmos have drained the life out of your battery. And, what’s more, you’re in the middle of nowhere!

Don’t let yourself get into this situation. Be prepared with a dual battery setup and keep on the move.

Setting up a Dual Battery System

1. Install a second (or auxiliary) battery This 70 Series Landcruiser has had a dual battery system installed. It also features a TJM BCDC 25Amp 3 stage charger with a solar input and a Bosch battery mounted on a Piranha battery tray.

Sounds simple enough, right? Think again. Few modern 4WD’s have space allowance for a second battery in the engine bay – this coupled with high levels of heat being generated by the engine means you might need to consider an alternative location in your vehicle – it could be, for example, behind the passenger seat or the load area.

Once you’ve found a home for your new battery, it will need to be mounted on an appropriate battery tray (for engine bay and tub installation). Trays should be sturdy, withstand corrosion and provide maximum protection against vibration.

The second battery becomes your power source for running fridges/freezers, camp lighting and your other mod-cons when you’ve stopped and set up camp. The original (primary) battery is kept for starting the motor and powering any items that operate only while the engine is running.

“The alternator is the power supply used by the vehicle to recover its start battery from the engine starting process and provide power to its electrical consumers once running.” (Redarc)

There are generally two types of alternator:

If you have a fixed voltage alternator, you’re pretty much good to go, because it will produce sufficient voltage to charge your auxiliary battery as well as your primary battery.

A smart alternator, however, “adjusts its output voltage based on the vehicle operating conditions to reduce the electrical load and, in turn, the mechanical load on the engine from the alternator” (Redarc).

This means that it won’t be able to charge your second battery.

So how do you manage charging your secondary battery while keeping your primary battery at full charge? In basic terms, an isolator allows the alternator to charge the primary battery to an acceptable voltage level and then switches the electrical circuit to allow the secondary battery to be charged.

Then there are smart isolators. These detect when the vehicle engine is running and the primary battery is being charged by the alternator. Once the battery has reached peak charge (≈13V) it automatically switches over to charge the secondary battery.

Note that smart isolators are suited to older vehicles that have a fixed voltage alternator. As most modern vehicles have smart alternators, let’s move on …

A DC to DC Battery Charger works in two ways: Some DC to DC chargers can also charge from the alternator and solar sources (we’ll talk about setting up solar power in a future article).

DC to DC Chargers (like the TJM DC/Solar Battery Charger by Projecta and the Enerdrive ePower DC2DC Battery Charger) deliver a 3 stage charging process for a faster and more powerful charge. “The first stage – bulk (constant current) – charges the battery faster while the second stage – absorption (constant voltage) – ensures the battery is thoroughly charged. The final stage – float – maintains the battery at a safe voltage allowing it to be maintained and ready for use indefinitely.” (TJM)

Added features like ignition connection (allowing the unit to operate only when the ignition is turned on) and smart charging features (the unit will regulate its output based on the loads connected to your battery banks) are great for modern-day setups.

Now you’ve got two batteries, the comfort of your next camp set up and security of knowing you’ll be able to move on in the morning is relying on them. You’ll want to know how much charge you’ve got, so install a battery monitor (besides, a nifty LED display will impress your mates). Displays can show you power levels in volts or as a percentage charge and can show you either or both batteries. You’ll always know how much power you have!

Now you’re set up out with reliable power source for both your vehicle and your gear, there’s even more reason to get out and enjoy your new set up. You’ll enjoy it more when you’re safe in the knowledge that the motor will crank over thanks to a full powered battery.

If you’re thinking about adding a secondary battery to your vehicle, speak to us first. We can recommend the right system for your needs, vehicle and budget. Leave a question below, send us a message by using the enquiry form opposite or contact either store by phone! 2 Comments on “Power up! When two batteries are better than one.”