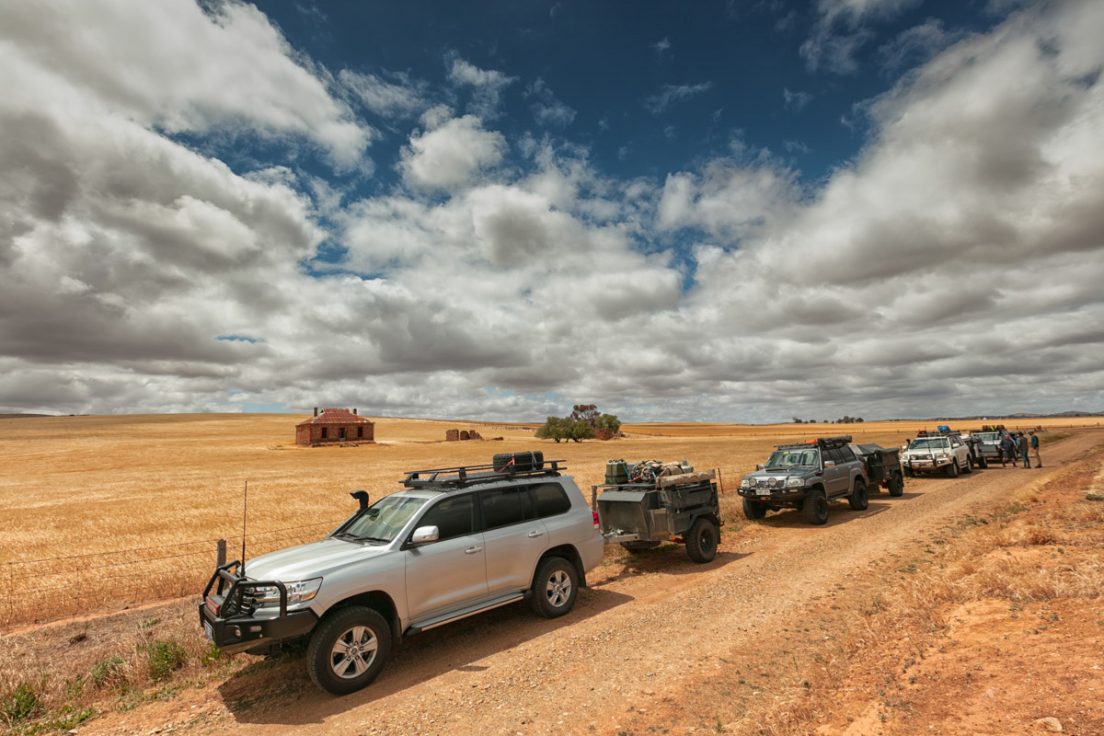 Who needs an excuse to get away when you’ve got a Patriot Camper?

Our own Drew Pritchard (Sales Manager for Patriot Campers at TJM) recently gathered together other Patriot Camper owners for a three-day getaway to Bendleby Ranges – where they could give their campers a run, challenge themselves on some great 4WD tracks, and raise money for the Childhood Cancer Association.

Customer, good friend, and fellow Patriot Camper owner Jeff Smith, suggested a SA Patriot Owner’s getaway – to share ideas, challenge ourselves off-road, learn from each other, and generally have a good time.

So a plan was made to do a three-day trip to Bendleby Ranges – a lovely 4WD park in the lower Flinders Ranges, chosen for its picturesque views, 4WD tracks (some not for the faint hearted!) and for being only 4 hours drive from Adelaide.

The invitation was extended to the Patriot Campers Facebook group and to customers as they came into store – we ended up with 18 people in a six Patriot Camper convoy!

We set out along the scenic drive through Burra stopping at the famous old homestead featured on the cover of Midnight Oil’s Diesel and Dust album. From there we plotted our way from Burra, up to Orroroo  through Terowie – a beautiful drive off the main highway and away from the traffic! We stopped in Orroroo for a fuel-up and feed, before making the last run, on dirt, to Bendleby Ranges.

Roughly 45kms from Orroroo to the office at Bendleby, the road varies from nicely-smooth to fairly-corrugated. The road was  very dry too (due to lack of rain), so long gaps were required between vehicles to avoid spending your whole drive breathing dust into your car and intake. Having a TJM snorkel fitted minimises  the dust from the road going straight into the airbox, clogging up your air filter.

Co-owner Jane greeted us on arrival; she explained camp locations and where amenities were to be found. The beauty of this park is that you can feel like you’re camping in the bush, but still have access to a flushing toilet and a warm shower!

The wind was pretty strong when it was time to set up our Patriot Campers but, with a bit of team work, we were setup and organised in no time! Arriving at camp around 3pm, the team decided to call it a day (once set up was complete) and we settled in for a good campfire and a great cheese platter (plus a few reds or beers depending on taste). It was great to see everyone from different backgrounds and ages getting along – all with the same mindset and love for camping. We had a big campsite for our group; we still felt like we were remote even though we had hot showers and flushing toilets nearby!

The next morning we enjoyed a hearty breakfast in preparation for a big day on the tracks. With guidance from Jane at the camp office, the plan was made: we would head to the Hungry Ranges side of the park to do most of the low to medium skill level tracks, then we would split up and Jeff would lead the less-experienced team back to camp, and I would lead the more experienced back up Billy Goat Track to drive the recently added track there.

The drive is beautiful along the ridge tops with lots of places to stop and look out over the surrounding farm-land. The beauty of this country never ceases to amaze me; how lucky we are to have these kinds of views so accessible to almost anyone who is keen! Our lunch spot – magnificent views over the lower Flinders Ranges. We parked up at a plateau just before Billy Goat Track and did a walk-up to check the track for the first few obstacles. The first tricky point is a right hand turn – pick the left line and keep your wheels on the ground. It’s very easy to get it wrong and be pointed down a very sheer drop! But good wheel placement and its no trouble. I had a quick look at the second obstacle and didn’t think too much of it (silly me), so I lead the charge and drove up with a few people to spot me through.

Even the straight bits can be difficult when you can’t see the road and you only have enough track to just fit a car on without driving off the edge … so I slowly idled my way up the steep track up to the first turn. So far so good. Feeling a bit more confident I pushed on to the second obstacle (that I had not had a good look at); it was a left-hand turn right on a cliff’s edge with quite large moguls that would lift most cars’ wheels clear off the ground. Good tyre placement was imperative and making a bad choice meant reversing perilously close to the cliff edge. In this situation, a rear TJM Air Locker or very good limited-slip differential (LSD) makes the world of difference, especially for all the independent front suspension (IFS) vehicles as they lift the front wheels off the ground – I got half way and had to hit the throttle hard to get up and out without lockers. If in doubt send another more capable car first so you can winch or snatch off it if required.

I drove all the way to the top of the track without any other major issues. It’s very tight and a long way down if you get it wrong! I jumped out of my car to help the next person through, but by the time I got there, Nigel in his locked Ford Ranger was already half way up the track. It’s amazing what a bit of confidence and a locker does for a fairly stock and smaller tyred car!

The rest of the team got up without an issue except for Andrew’s  MQ Triton that picked the wrong line on the second obstacle and found himself in a position you don’t want to be in: tail end hanging off the cliff and one front wheel right up in the air. I grabbed the side that had come off the ground and got the driver to push it forwards as far as possible so I could block his back tyre with a rock to get him in a better launch position. Once ready I told him to give it a bit and he lifted one-by-one and popped up out of the holes.

It’s great to have customers who are keen to get out, learn, gain experience and test the products we sell them properly. The TJM suspension really shone on Nigel’s Ford Ranger and the Andrew’s MQ Triton, as I don’t think they would have made it with their standard suspension.

We then headed for the new track – a fairly easy drive – cut into the ridge, which offered another chance to take in the amazing views from that end of the Ranges back towards Orroroo.

After a long and successful day we arrived back at camp (after I managed to get us lost) and most of us shuffled off to have a shower and prepare for dinner. We gathered around the camp fire to chat and tell stories of the day.

I still think one of my favourite part about camping are the great meals we have while away. There’s nothing better than tucking into a 5 star meal under a million stars. Tonight’s feast was roast carrots, onions and potatoes (cooked in the Weber attached to the front of the Patriot X1H) served alongside a few 800g dry aged Tomahawks, and paired with a beautiful SA shiraz. 5 star dining under 5 million stars. Not roughing it too much with the Patriot Camper kitchen!

Sleep came easily after a long and fulfilling day, thanks to the beautiful innerspring mattress in the X1H – big enough for a 6ft 5 fella too!

We had a slow start to the day as we packed down all the campers and made sure that the camp site was as pristine as we had found it. The plan for the rest of the day was to head to the Bendleby Ranges side of the park (an easier drive yet just as beautiful), so we hooked up all the campers and drove to a lookout to get some group photos. It was a great way to finish off a very enjoyable trip.

If you’re looking for an easy getaway complete with spectacular views of the lower Flinders, great hospitality and amenities to suit everyone from the most basic to the most advanced camper and/or 4WD enthusiast, then you can’t go past Bendleby Ranges. Thanks to the great bunch of people who joined us for the weekend and helped us raise some much needed funds for the Childhood Cancer Association. Our group of Patriot Campers campers!

Would you like to join us for the next TJM 4WD event?